Whiteland Township was divided into two townships in 1732. East Whiteland covers more than seven thousand acres. Native Americans called the area "The Dark Valley" because of the tree and undergrowth that once blanketed the land. 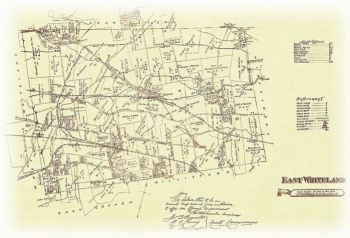 During the American Revolution, General George Washington and many of his troops camped at Malin Hall, Malin Road, in preparation for a September 16, 1777 encounter with British General William Howe. The Continental Army also camped near White Horse Inn on Swedesford Road. Because of inclement weather, however, "The Battle of the Clouds" was never fought.

Sean Moir, a resident of Tredyffrin township has created an animated map showing the troop movements surrounding the battle locally referred to as the Paoli Massacre. Watch and see the troops move along roads that we still use today. As a guide, the blue shapes represent Continental soldiers, red represents British soldiers (the red coats) and the green shapes are Hessian mercenaries who fought for the English.